The Kinnegad circuit was the route for Round 3 of the league. With the Giro and the Rás in full swing, all riders were keen to do a bit of racing. We had 29 riders in total, consisting of our own club men & women along with riders from Trim, Donadea, Bikeworx Celbridge and Lakeside Wheelers.

There were 6 groups in total on the road. Brad was let out of the traps first with 3 minutes to Marcella, Sandra, Evan and the newest addition to the racing circuit, Donadea Junior Aaron Cullen. Paul Kavanagh’s Group 3 started an additional 7 minutes back, Peter Schweppe was controlling his troops 5 minutes further back with the semi scratch and the scratch group on their tails.

Anyone who has ridden this course before knows that the roads are dull and draggy. They will make you suffer if you’re trying to turn a big gear and trying to keep the pace high. At the start of lap 2 the gaps were definitely being reduced. Aaron and Evan were working well together and had a 1 minute gap on Marcella, Sandra and Brad. The trio also working very well together. Paul Kavanagh and Denise Molloy had distanced the rest of their group and were in chase of the 5 up front. Peter had his group very well organised and with strong riders in toe they were working well with all taking turns in keeping the pace high. Unfortunately, midway through the second lap Ciaran Leech hit the deck after a touch of wheels. Rumour has it that he bounced off the road and kept riding. Well maybe not quite but he did dust himself off and finished the race. Them Leech’s are made of tough stuff! The fact that the whole group waited for Ciaran to get back on, shows great sportsmanship.

Semi Scratch had only sacrificed 1 minute to scratch by the end of lap 1. Andy had his group well-structured and they managed to keep a gap to scratch right to the finish, even with the “Motorbikes” chasing hard!

As the skies opened, all the marshals at the finish line were struggling trying to get umbrellas opened and iphone cameras/videos at the ready for the photo finish. In the absence of Michelle Kavanagh (get well soon Michelle!) Donal Kelleher was at the ready with his quick fire camera to capture the bunch sprint. But the bunch sprint was not to come! In the distance we could see the lead car approaching with a single rider hammering along the road. Aaron had ridden away from Evan and was on his way to victory in his first bike race. Well done Aaron! Definitely one to watch for the future.

The gaps had closed and the riders were coming thick and fast. Denise and Paul contested a sprint for 2nd with Denise just edging it by half a wheel with Paul claiming the max points of 25 for first club person across the line. Evan grabbed 4th, Brad got 5th and Marcella keeping her good run of form from last year, getting 6th. Sandra McCann received the prize for 1st unplaced lady while Michael Kane got 1st unplaced Junior. 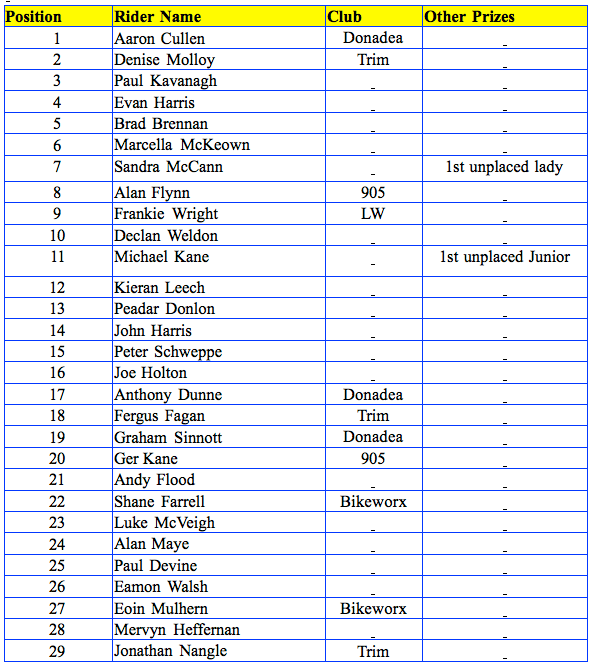 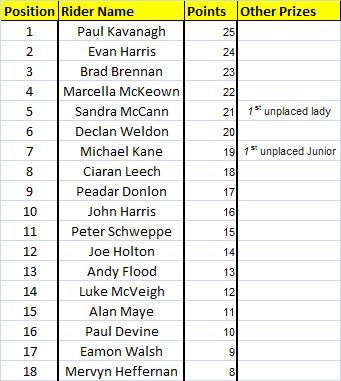 The third round of the 2014 club league takes place on Thursday 22nd May at 7pm, and is two laps of the Kinnegad Circuit, approx 33.5km in total (details below).

*** Be sure to check the rota to see if you are scheduled for Marshal duties!! ***

Sign-On is at Scanlon’s Pub in Kinnegad village – if you are driving there, please go to the rear of the pub to the car park, as this is our designated area for parking.
Sign-On will be from approx 6:15pm or so.

Don’t forget the 2-euro sign-on fee for Club Members (and 5-euro for guest riders).  This is just to cover the cost of the prizes and the food after the race.

We will roll out then to the Starting point, which is just opposite the Kilucan Road Junction, as you leave Kinnegad on the old N4 Sligo Road.

Below is a map of the circuit, but here are the details in text:

Starting from the Kilucan Rd junction, head out the old N4 towards Corelstown.
Turning left after the little shop, and straight all the way to the end of that road, which brings you to the old N6 Galway Rd.
Turning left there, heading back towards Kinnegad, then left up the narrow road (CAUTION HERE!!!!!) which is the last left turn before coming to the old Apollo Garage.
At the top of that narrow road, we turn left out on to the old N4 road heading out again towards Corelstown to start the second lap.
Next time round, you come out of this junction, left, to the finish approx 1km from there.

Create Maps or search from 80
million at MapMyRide