And we’re off!
First round of the 2014 Club League took place on 24th April with a 16km ITT just outside Kinnegad village.

The evening went off very well with a huge turnout for the race – largest number of competitors we have had for the Time Trial in fact!

Special thanks straight away to Lisa Nelson and Colm Maye for their help with the timings – quite a difficult job with the large overlap when riders were returning as other riders were still rolling out from the start!  Lisa’s great multi-tasking skills saved the day! 🙂

The rain held off for the entire race, with just a wet road to contend with in Milltownpass, from a passing shower just before the start.

We had a great mix of riders taking part in the race – quite a few first time racers and also a great turnout from the women too!

Some super-fast times were recorded, with the course record almost being broken by the nights’ winner – Keith Hughes from Team Bikeworx in Celbridge – who made the trip out along with two other members of their team.
Keith came in with a 40.7km/h average speed, giving him a time of 23m35s.  Just 5-seconds outside the record set by Ger Dunne two years ago.

Just a mere 45sec behind Keith, was our own super-Junior Luke McVeigh, with a time of 24m20s, and then Jacob Baldwin a further 3sec behind, to finish off the podium places.
Great times from both Luke and Jacob – race form and a good winter of training really coming to the fore now!

We also had visitors from Trim CC, Team905, and Lakeside Wheelers taking part in the league – always great to have, as it makes the league all the more interesting, and thanks for coming over guys (and girls!).

So, with the highest finisher in the Club being Luke, he takes over the Yellow Jersey for the first road race – this takes place next month (8th May) on the Rathcore Circuit which we used last year.

Thank you to everyone for helping out on the night – John with the traffic management at the start area, and to Lisa and Colm for the start and timings, and to the marshals out at the turnpoint also for getting everyone safely around.
Also, special thanks to Michelle for providing the great photos – these are available on the Club Facebook page, and we will link them here on this page shortly also, for those of us who don’t use BookFace 🙂

Here are the results from the night – and the club league table is on the main league pageHERE. 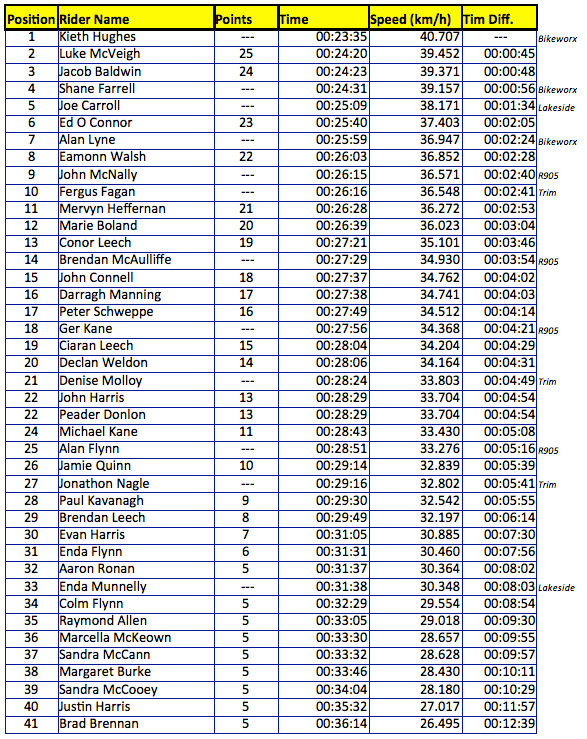 First rider will start at 7pm sharp – this is important to ensure the safety of all participants, as we need to have everyone back safely because daylight will fade fast.

Sign on will be from approx 6:15pm, and the start location is just west of the Milltownpass roundabout on the old Athlone Road out of Kinnegad.
Please ensure you arrive in good time to allow for sign-on, and your warm-up!

Riders will set off at 1 minute intervals on a fast route from Kinnegad to Milltownpass on the old Dublin to Galway Road returning on the same route to finish at Kinnegad.

Start/Finish line is just after the last roundabout leaving Kinnegad for Milltownpass.

Tips for warming up correctly can be found here.  Warming up correctly is very important, not only to get the best performance out of yourself, but also to avoid possible injury by trying to ride the race from a ‘fresh’, rested state (see here for some of the science behind it all).

Also be aware the regulations for saddle angles (in a nutshell, the saddle must be level:UCI Article 1.3.014 requires that “the saddle support shall be horizontal”).